With Trial by Song only weeks from release I thought I’d take a look at some of the retellings that have shaped my reading and writing over the years. Each of these books takes a different approach to what a retelling can be. I arranged it in order of which ones I read first. This list was collected over a lifetime, so these titles span a wide reading level range.

At her birth, Ella of Frell receives a foolish fairy’s gift–the “gift” of obedience. Ella must obey any order, whether it’s to hop on one foot for a day and a half, or to chop off her own head! But strong-willed Ella does not accept her fate…

Against a bold backdrop of princes, ogres, wicked stepsisters, and fairy godmothers, Ella goes on a quest to break the curse forever.

I read this book a lifetime ago when I was in elementary school, and it still stands out as one of my favorite versions of Cinderella. Not only does Levine write with wit and warmth, but she sends Ella on an adventure that is so fun and endearing that by the time the familiar Cinderella beats show up they almost pass you by because they make so much sense for the world they happen in. The takeaway here is that this loose adaptation becomes a story all its own.

2. Beauty by Robin McKinley is a fleshed-out retelling of Beauty and the Beast.

Beauty has never liked her nickname. She is thin and awkward; it is her two sisters who are the beautiful ones. But what she lacks in looks, she can perhaps make up for in courage.

When her father comes home with the tale of an enchanted castle in the forest and the terrible promise he had to make to the Beast who lives there, Beauty knows she must go to the castle, a prisoner of her own free will. Her father protests that he will not let her go, but she answers, “Cannot a Beast be tamed?”

Unlike the last story this one doesn’t deviate from the traditional story (and by traditional I mean pre-Disney). McKinley uses all of the stock fairytale characters and fleshes them out without changing their story from the one everyone knows. This type of read is comforting in its familiarity. It doesn’t throw any curveballs, but delivers exactly what you signed up for.

3. Zel by Donna Jo Napoli is probably the least known book on this list, and it takes a twisted look at the Rapunzel story.

High in the mountains, Zel lives with her mother, who insists they have all they need — for they have each other. Zel’s life is peaceful and protected — until a chance encounter changes everything. When she meets a beautiful young prince at the market one day, she is profoundly moved by new emotions. But Zel’s,other sees the future unfolding– and she will do the unspeakable to prevent Zel from leaving her…

I’m sure there are more out there, but this was the first time I came across a version of Rapunzel that explored the psychological effects of being locked away in the tower. Napoli follows the familiar narrative from a different perspective. It changes the way you think about the story and its themes.

4. Daughter of the Forest by Juliet Marillier is one of my all-time favorite books. 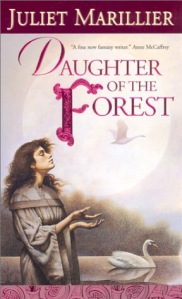 Lovely Sorcha is the seventh child and only daughter of Lord Colum of Sevenwaters. Bereft of a mother, she is comforted by her six brothers who love and protect her. Sorcha is the light of their lives, they are determined that she know only contentment.

But Sorcha’s joy is shattered when her father is bewitched by his new wife, an evil enchantress who binds her brothers with a terrible spell, a spell which only Sorcha can lift–by staying silent. If she speaks before she completes the quest set to her by the Fair Folk and their queen, the Lady of the Forest, she will lose her brothers forever.

When Sorcha is kidnapped by the enemies of Sevenwaters and taken to a foreign land, she is torn between the desire to save her beloved brothers, and a love that comes only once. Sorcha despairs at ever being able to complete her task, but the magic of the Fair Folk knows no boundaries, and love is the strongest magic of them all…

So like Beauty, this is a pretty straight adaptation of the source material. However, Marillier uses the story to explore sone mature themes. Her world is fully realized with cultures, religion, prejudices, and consequences that stick. It falls under historical fantasy, so it takes a deeper look than the others at a world that much more closely resembles our own.

5. The True Story of Hansel and Gretel: A Novel of War and Survival by Louise Murphy is the final book on this list and it’s the most historical one of the bunch.

In the last months of the Nazi occupation of Poland, two children are left by their father and stepmother to find safety in a dense forest. Because their real names will reveal their Jewishness, they are renamed “Hansel” and “Gretel.” They wander in the woods until they are taken in by Magda, an eccentric and stubborn old woman called “witch” by the nearby villagers. Magda is determined to save them, even as a German officer arrives in the village with his own plans for the children.

As a flip flop to the last one, history drives this story wearing only a thin fairytale veneer. Murphy juxtaposes real world monsterocities and the evils of war with a story of two lost children just looking for something to eat.

So there you have it, five books with very different treatments of their source material. If you want a more contemporary list I have a few more on the way. These are the top five that shaped the way I approached writing a fairytale and have set the bar for what I look for when I read.

What did you think of this list? Did any of these make your shelves? What are some of your favorite versions of fairytales?

10 thoughts on “My Top 5 Most Influential Fairytale Retelling Picks”