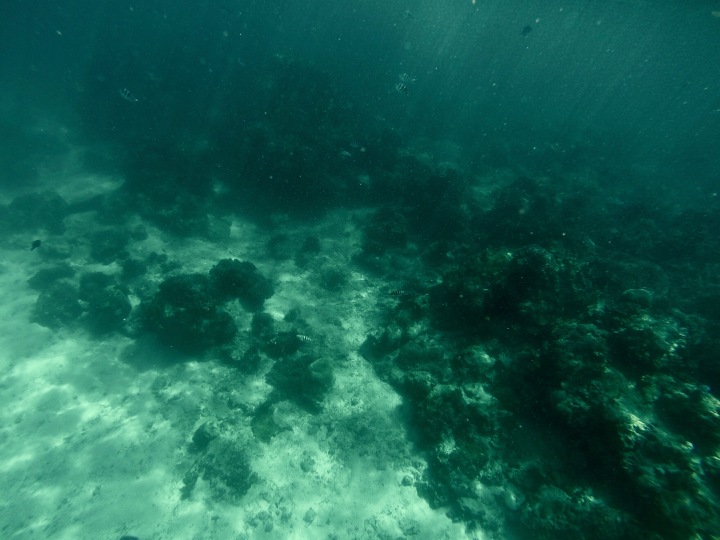 Here is part 2 of my as yet untitled Well story. Sometimes killing the monster is just the beginning….

(As always, constructive criticism is welcome)

Sam woke on a narrow bed. He didn’t know the exact moment he came awake because one darkness bled into the other. A thick swath of gauze wound around his face from forehead to nose. Breathing tubes stabbed up his nostrils and down the back of his throat so that his first impulse was to gag to clear the airway. His face ached, angry and raw. After shifting on the cot he realized that the worst of the pain was kept at bay by the morphine seeping through the line in his arm. There was a soft creak from across the room followed by steady footsteps. He caught a whiff of rose-scented perfume as someone bent over him.

“Mr. Scott, my name is Meredith. Can you hear me?”

He tested a nod. The small movement stretched his skin. Despite the morphine, he gasped. Meredith put a hand on his shoulder and gently pressed him back against the rough, lumpy pillow.

“You’re in the Gilcrest Memorial Hospital. You’re being treated for chemical burns.”

Sam reached up to touch the padding over his eyes. His throat was sore and he didn’t trust himself to speak. Meredith understood what he was trying to ask. She sighed and shifted her hand from his shoulder to take his hand.

“Now that you’re awake Dr. Everett will be in to discuss treatment options.” She started to move away from his bedside, but he tightened his fingers.

“What was it? Did they get it?” It didn’t occur to him that she might not know what he was talking about. The attack existed with such hyper detail in his memory that it seemed impossible it wasn’t ingrained in her mind too.

“Mr. Scott, the remote for the TV is under your left hand and there’s a button by your right to call a nurse if you need anything.” She guided his hands to show him where each was and then stepped briskly from the room.

Sam fiddled with the remote until he heard the talking heads from the local news channel. He was about to change the station when he heard his own name.

“…the injured rescue worker has been identified as Mr. Sam Scott. According to witness reports the attack occurred while Mr. Scott was trying to recover the body of local high schooler, Eddie Dobbs. His attacker has been described as—and I quote—a monster.”

The reporter cut to an interview with John Reynolds whose voice was garbled almost past recognition due to wind interference. He gave his version of what had happened. But, Sam noted, now that he was out of the tunnel Reynolds had much more bravado. Sam seethed at the embellished heroics Reynolds claimed. He even took credit for killing the creature with the trowel.

“What exactly was it you found down there?” asked a female reporter with a high nasal voice she was trying to pitch lower to sound less like a child.

“When I got home I went online and tried to figure that out. But it’s not like trying to identify a snake that bit you by its stripes. We’re talking about a monster no one’s ever seen before. The closest descriptions I could find came from old wives’ tales and sailor stories. It’s the kind of stuff I don’t want to say out loud because it sounds ridiculous unless you were there and saw it, you know what I mean?” He practically panted with eagerness.

“If we’re talking about something out of folklore do you think that accounts for the remains disintegrating?”

Although Sam couldn’t see it he heard by the flatness in Reynolds’ response that the reporter scored a direct hit.

Eager to record his candid reaction she repeated the question and filled in the details.

“When the Forest and Wildlife Research Team went down to recover the remains they said there was nothing down there but fish bones. However, the soil samples they took at the bottom of the well were a direct match and contained the same minerals and particulates found in samples taken from various freshwater sites in Greece—many of which have ties to local folklore concerning naiads and water nymphs.”

Sam remained in the hospital. Apart from a couple of members from the rescue team no one came to visit him. The city was too caught up trying to solve the mystery at the bottom of the well to waste time and compassion on its victim. It was just as well. Sam hated sitting up on the narrow bed bandaged like a mummy while his friends stared at him in silence. If he couldn’t see what they were thinking he was left to imagine it, and he pictured nothing but pity and disgust.

His doctors informed him that the chemical burns he sustained were the most severe case they had ever treated. There would be surgeries, therapy, and even skin grafts down the road. The chances that he would recover any of his sight were slim, and Dr. Everett encouraged him to walk up and down the hallways under the supervision of a nurse to accustom himself to maneuvering without his sight. It was during one of these walks that Sam witnessed the first victim come in.

The front desk at the Gilcrest Memorial Hospital was circular, situated like a heart between the branching arteries of hallways and corridors. Meredith, who was one of Sam’s regular nurses and the one he grew most familiar with, was supporting his arm as he made a circuit around the desk. The sliding glass doors slid open and a gust of frantic energy blew in with the gurney. Loud, wet heaving sounds covered the screech of an unoiled wheel, and Sam’s stomach doubled over at the sound of liquid splashing into a plastic bag.

Meredith guided him against the wall and out of the way to make room for the cloud of EMT’s. While two of them rolled the patient down the left-hand corridor toward the emergency wing, one technician stayed at the front desk to fill out the admittance paperwork and talk with the receptionist.

“Abby Larson,” he said in clipped tones as his pen tapped the clipboard. “Looks like severe food poisoning. Her husband said she hasn’t been able to keep anything down all morning. We picked her up down at the trailer park.” Although there were several trailer parks in town, only one had come to be known as ‘the’ trailer park.

“Come on, let’s get you back to your room,” said Meredith in a voice one normally used to usher children to bed. She steered Sam away from the lobby to give the receptionist and EMT the privacy to gossip.

By the next day four more people from Wheelwell Park had caught the same strain of what was now thought to be a virus. Sam happened to be making his rounds when the third victim came in—old Randy Chapman, the landlord. From the man’s deep groans it was obvious that he was in a lot of pain. Sam leaned against the wall and he waved Meredith away, insisting she help the other nurses with the old man. When she protested he insisted that he wanted to see how well he could navigate without her help. Gilcrest was a small facility, and by now Sam was starting to learn the layout of the place. He followed Randy’s heaving and moaning down a hallway and paused just outside his door, leaning against the wall as though he was stopping to get his bearings.

“His bacteria levels are off the charts,” murmured a nurse not far from where he stood. “It’s like he drank straight sewer water. This is the third case today and I just heard that another call came from Wheelwell five minutes ago. You don’t think—?” But at that moment the nurse noticed Sam eavesdropping and he was quickly scolded and steered back to his wing.

By morning Randy was dead. Sam knew because he asked if he could pay the old man a visit. The bacteria was too hard on his system, the nurses told him. At seventy, it was a wonder he held on for as long as he did. Sam kept to his room after that. He kept the television tuned to the local news.

At first the outbreak appeared isolated to the trailer park. Within a week every single resident had contracted the virulent illness and most were so violently sick their recovery was deemed unlikely. But by the end of the second week the epidemic spread to the city.

The water supply was contaminated. Even before ph levels were checked people began to whisper that the creature had cursed them for disturbing the well. ‘Experts’ explained that the monster’s remains had dissolved into the water table. The theory didn’t account for why the toxins were so widespread, or why those who drank water filtered through the city’s treatment facility were starting to get sick too.

That concludes the second section of this story. Only one part left.

One thought on “What Dwells in the Well pt 2”